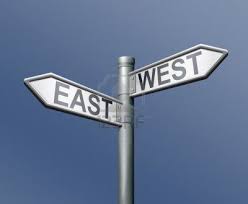 We grew up with teachers who told that we used to have a secret formula to make devices that can fly in the sky – as described in Ved and in Ramayan, as a ‘Puspak Biman’. However, it was the Wrights Brothers who made the first real flying plane. They didn’t have the formula to work on and the flying machine was the product of their own imagination. So, the West rules here !

People in the Western world spend billions of dollars on fitness instruments yet, they are more obese than people in the eastern side of the world. Thanks to Yoga, even a penniless can do it with a little knowledge. East rules here !
They hired 200 best engineers for an idea, and invested 200 billion dollars to design a Space Pen, pen to be used in the space. We ask, why didn’t they use graphite pencil for the job? I don’t think “graphite dust, requires sharpening, and is erasable,” is a valid enough reason to spend such a huge resource.

People in our country worship Goddess Laxmi for wealth and Goddess Sarashwoti for knowledge. But, Bill Gates, Mark Zuckerberg, Larry page, Warren Buffet should never have cared of Laxmi or Sarashwoti in their lives. Their brilliant minds have created enormous wealth – not only for them individually but also to the overall economy of their country. Do Americans worship those goddesses ?

Pfizer pharmaceuticals, an American drug company, spends billions of dollars to research for a medicine called ‘Viagra’ and we solely depend on natural herbs – hot spices for the same hob. We still have bigger pie of population to contribute to this world: 60% for the world population come from Asia alone.

We have at least one god to worship everyday of the year, in contrast to the Western people most of whom have only one god, Jesus Christ. Yet, millions of gods haven’t helped the people in the East with their poverty and West-dependence. Ever wonder why we have 330 million god and goddess ?

Western culture accepted the idea that school children should be educated on sex, a lot earlier than the East. We, here on the eastern side still go nuts over the idea of educating them on sex. Have you ever imagined what would have been the population of China and India, if they have said ‘yes’ for sex-education in school? May be, it would have been less than the 60% of the world’s population. 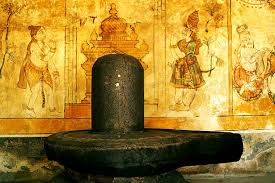 It really has not been that long, when I came to know, we Hindu worship a Shiva’s Linga (Shiva Lingam); Lord Shiva in the form of a phallus (penis). But, this knowledge made my skin crawl shiver in sheer disgust.


One of my friends, who is devoted to Shiva, tried to make me understand her side of story, a good side to that story. But I was so disgusted; my mind refused to understand the good-good things she was telling me. My mind simply rejected to hear her version of the worship culture. I am a Hindu by birth but, I have lost the respect for the religion due to absurd things like worshiping the Shiva Linga. Going temple every morning to worship somebody’s phallus (who cares even if belongs to a god) is just too much in the name of Dharma. Give me a break. I am not that type.

I don’t care what you do in your bedroom. You are free to explore your wild side but, do me one favor and don’t tell me all about that.
I am not a temple visitor, as it requires me to walk around the temple area on bare feet and temples are not that clean do to so. But, it’s been decades since I have visited a temple.

Wait a minute; do I need to enter temples ?

Most of the time it’s on the roadside to see how clean the area is! Some says Pashupati is cleaner than before. But, I don’t wants to know. After knowing what exactly in the temple, I am not sure about others but, I am least interested to visit it.

One of my good friends once said about ‘Unmatta Bhairav’ that, it’s image boosted his mood occasionally; and time and again he used to go to see the image just to recharge him.

I am wondering: What does worshiping Shiva Linga teach us? What should we be learning from this worship? Why do thousands of people visit Pashupati Naths’ temple every morning? What’s in their mind ? Why is it so important to visit that place that houses Shiva Linga?

In the Shiva Puran, a book written about lord Shiva, says, ‘The linga of Shiva, cursed by the sages, fell on the earth and burnt everything before it like fire. Parvati took the form of a yoni and calmed it by holding the linga in her yoni’. The shiva linga seen in the first photo is the symbolic sculpture of that procedure. The religious pundits believe it to be the symbol of creation.

It is not only Pashupati Nath Temple that houses Shiva’s Linga. There are many other sexual sculptures in our temples. In fact, the sexual representation in our religious destinations are more than such books we can buy from the Nepali market (Ok, let me admit one thing here, this kind of book is some thing I don’t go for hunting and blue movies do not appeal to me either). There are few explanations on why such erotic images of gods and goddess in the temple like -to ward off the bad intentions in people; don’t make sense.
I wonder, what kind of bad intention people might get while visiting temples? Or, is it an advertisement – so that people visit temples more often?
I wonder, what image comes in those people’s mind when they really cry and need to reach out for the God and kneel down praying ‘Oh God’ !
Just wondering !