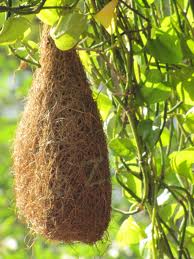 Story 1 : Once upon a time, there was a king, who saw a nest on top of his palace and got baffled, because he didn't see any ladder or any tall tree with its branches to reach the place. So, he wanted to know how come the bird made its next there. Not surprisingly, he sent one of his close aide with a big ladder, to see how come a bird can make its nest on top of the palace ? He was even more baffled to hear the news that the nest had little birds inside  it. He became curious and out of curiosity, he left the ladder nearby the nest, so that the birds can use it to reach in there home, just if in case. He started studying the nest for a couple of weeks and then one day the little bird flew from the cage; without using ladder. At this moment the king realised, that birds do not need ladders or any tall trees or its branches to reach to the top of a building or a palace.

As for a moral of a story it added at the end of a story that, sometimes even big people also make mistakes, due to absent mindedness.

What this story failed to teach, young child like me was, just because he was a king who was born with position, power and wealth; this also does not mean, he was born with common sense too. The story teach us to be the slave of those, who has power and money but not the common sense.

Story 2 : I am sure, all of you must have read the story of  Ekalavya, who was so very fascinated and mesmerized by the art of archery skill, that the Pandava brothers were getting training in the jungle by an expert of that era, who were called guru then.

The young boy Ekalavya, was not from the very affluent family background nor was he from royals like Pandava; instead he was untouchable of the society. Even then, he went to the guru and asked him to teach him the same as the Pandava brothers were getting. Knowing our culture and society, it should not surprise anyone that the young boy was denied for the training without a reason. However, it was so loud and clear, that he was untouchable, underprivileged, and nowhere near to the royals, to get the training, meant only for the royals.

Young Ekalavya did not take that ‘no’, and did not let that ‘no’ let him discouraged either, for what he loved and liked so much. It was like love at first sight  for him. Therefore, he went to the jungle, every day; to watch the training from the hides and later he self trained himself for the archery. His interest in archery was so much that, he gained a lot better knowledge by the teaching and self learning, than that of royal students.

One day, when the pandava brothers [ five brothers] were busy on training with their guru, got lost in the forest. Their dog, who had gone into the deep forest alone, saw Ekalavya practicing archery. After seeing him, the dog started barking like crazy, its relentless bark distracted the eager boy to focus on his practice, so much so that he thought of stopping the bark. He did stopped the dogs bark, with what he was good at, his arrows. The arrow did not pierced the dog, but stopped the barking. Later, after the training was over, the royal boys found the dog was missing, so all of them went to the deep forest, looking for the dog. The dog, by now was returning back towards the training center, but they were stunned at the scene and at the sometime, was also wonder struck, how come an arrow that was inside the mouth of a dog was not hurting it at all ! They tried to pull the arrow, but none of them could do so; not even the Arjun, who was  the best amongst the five.

Then, they headed towards to deep forest, to find out, who did it. There they saw  Ekalavya doing his practice. Then, they requested him to pull the arrow from his mouth, which he obliged. At this time, the guru asked him, where did he learned this skill ? he innocently replied that, he watched him teaching the royal boys and after some times, he self gained the knowledge. One thing is a must to mention here,  Ekalavya had built the statue of this same guru and he did his practice in front of that statue, every day imagining, how he would have guided him.

It was then, guru asked him time to pay for the training. The boy was willing to pay, but the sly and sleuth guru asked his thumb, no, not from his left hand but from the thumb of his right hand, the most important part of the body; that is needed for the archery skill. And Dorna just chopped off his thumb and paid that shrewd guru, for the training which he never gave. Ekalavya, I guess, did not even realized that this pay meant, end of his career or further gaining knowledge in this area. This also ensured the name and fame to the royal boys without the tough competition from the common man who was never trained by the best in the country.

This particular story had been repeatedly told to us, when we were young, to pay our due respect to teachers; and I just grew up hearing it like this. 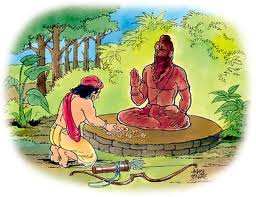 What this story failed to teach us is, today, we know Arjun is the best archer in the history  of ancient eastern culture, because of the discrimination in caste system that our culture indulge in. This kind of discrimination is what, pulls the backwards of the society, for this or that reasons.  Pandava brothers also should be blamed equally, because they were present at the scene, when the Ekalavya chopped off his thumb, but none of them dared voicing against their guru, because deep down they realized it was good for their false and fake swelled up royal pride, who were less talented than the boy, who was not trained at all like them. Just because they were privileged and royals, does not mean they did not snatched the opportunities from the common man.

Next time, when some teacher tells you this story, remember he is not telling you to pay the respect to teacher for their hard work, but he is biased and taking part openly in discrimination game and spreading the deep rooted crab mentality, that have been gripping our society for centuries. Besides this moral, this story also fails to teach us one more very important lesson in our life, if we are interested in one area, the self gained knowledge; is far better than, any teacher in the world or for that matter even royal teacher can teach us.

Story 3 : But my favorite story is here, this is also a story, which I read when I was so young and have not been able to read it, in my adult life or in any story book since then.

Once upon a time, there was a poor man, who used to live in a small house. The house, he stayed was next to an eatery. He was so poor, that he could not afford a decent meal for one time, so forget about meat on his daily meal. But his perks was that, he was staying in front of the very well known eatery. It so happened that, when he used to sit down for his stale and pale food, just then the whiffs of scented curry and meat used to fill in his room and then with that; he used to eat his meal, thinking, he is the one who is enjoying the good meal from the eatery.

One day, as usual he sat down for his evening meal, and waited for the scent of chicken curry to fill his room, so that he can start his meal. But today, unlike other day the scent did not filled his room so, he just waited and waited and waited, but the good whiffs of aroma never filled his room. Its been so long that, he had been eating his meal, with the scent, he was so used to of  having his meal with the rich scent only, coming from the eatery, not without it. Not surprisingly, he just could not eat his meal, without the aroma of good curry filling his room and his nose and all his senses.He slept that day, without having his meal.

The next day, he went to the eatery and talked with the owner. The owner, listened him patiently, and after hearing the full story, he told him that, he has to pay the price for the meal, as of the market value for which he has been eating for years. This surprised and  angered the poor man, and at the same time worried him too. He did not know, what to do next. The discussion got bigger and bigger and the crowd got divided into two. Some agreed with eatery owner, and some felt sorry for the poor man. The simple conversation got so big that, they landed in a court and to the horror of the poor man; the judge also ruled, in favor of eatery owner.

To pay the dues and all the old dues, the poor man, really have to do all kinds of hard work on his extra time to manage the money to the eatery owner. On the judgement day, the time of the pay, the eatery owner was so excited and happy to get the huge money. So needless to mention, he was wearing the biggest smile, ever in his life that went ears to ears. It was not only that, he was going to make extra money, but it was coming from purely his insane sounding idea too.

The poor man was really poor and because he was a poor man, so all of his pay money was in small change, which was kept in a small potalee [ a bag like stuff made by cloth used to keep the small cash], which made a lots of sweet sound of money, when shaken. The judge took the potalee from the poor man, containing all the old dues and shook it really well, in front of the eatery owner, then told him; this is your pay. It surprised the eatery owner but the judge clarified it saying, “only the sound of the money, in return of the scent, which the poor man was enjoying, not the actual food. So, why expect the real money for unreal product, which was never sold to him ?”

Now, its the poor man’s turn to be happy and smile from ears-to-ears. It relieved him so much after learning that, he do not have to pay for the thing, which he never ever bought.

At this time, I do not remember what moral this story taught me then, but it came with the best teaching of all story I mentioned above, a good lesson and a good moral value to learn.

There is law and order when common man are involved and it restores the inequality in our society. I wish this judge was there to give the justice to Ekalavya and his common sense to that story teller of our first story, who do not have guts to tell us that royals only have status and positions, but they are not gifted with talent, common sense and conscience.

If only we have more people with a common sense to teach us; when we were growing up.