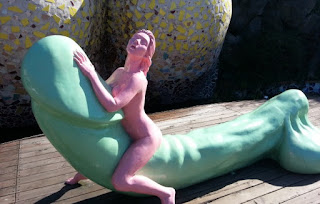 Every time I see this sculpture, a volcano of thought erupts inside my head. And, why not ? It's a male private organ being fancied by a woman. Not just that, look at it, it's a huge and looks bigger than the woman who is dreaming about it. Soooo long and healthy piece ! So, that volcanic eruption of thought is not that unusual, well I guess ! They say our private parts has power to open all the senses at once and apart from all the senses, another must the brain - other than our five senses. Some say the rush of adrenaline. Whatever it is, this particular sculpture really has power to make me ponder long and hard.


Of all the thoughts, one thought goes like this. I think this artist must have come to visit Kathmandu and he was in the city he must have a simple wish to visit Pashupati. But, once he was in the place He must have been denied to enter gate of the Pashupati temple, for he not being a Hindu. His curious mind must have nagged him so much, why other religious believer are denied to enter in pashupati ? What for ? why they do not allow any camera[s] inside the temple premises ? What is there which needs to be hidden from many caste, creed and nationality ?


Now, we live in the age of internet. Some call it age of communications too, as we are bombarded with so much news and views that was never possible before. If you have a curious  mind, now all you have to do is to ask google. Like who, what, when, where and why. Once you ask those questions in Google’s page, you can find all the answers in a matter of seconds. agreed it takes time to read it all but the question is answered. In my mind I can see him digging in google and then finding what is inside the temple of Hindu believers. Before that there is no doubt that, this curious guy must have bought some books and miniature statues from outside the temple just to be sure what he learned from Google or the people around the temple. 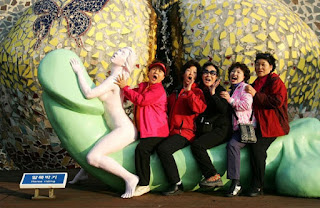 Not surprisingly, then he must have thought what so fuss about that sturdy but minuscule yet artless private part of a man ? in his mind he must have got questions: what ; you worship that and keep it in temple ? then he must have remember the time when he was denied to enter in Pashupati just to have a look at that ugly penis of a man called Shiva, hindu regards him as god. Then he must have got another thought. Thought of a hurt man who felt humiliated for no reason whatsoever outside the temple gate. Then a flash of a dream was conceived in the head of this man, who just felt shattered within. Let me show you, my version of how it should look like, where it should be placed.


Now I get another thought, when this artist takes a stroll in the park and sees many women riding ‘it’ at a time without even being zealous of other one, he might get satisfaction in deep within. It's not necessary that he has to share his feelings  with anyone. Then at that time he feels no qualms in his heart to feel the bitterness of being denied to enter in Pashupati to see what he could place it in public places, where anyone can enter regardless of caste, creed and nationality. And yes they can carry camera with them. 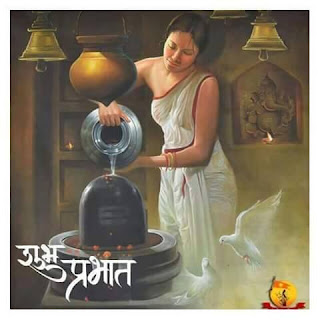 Interestingly, every man on the planet earth has that small yet important body organ which need not be placed in temple to worship nor keep it secrets from other religious group.


Perhaps, it must be hidden inside the temple for its ugliness, artlessness and senseless idea that we need to worship such thing !
Posted by Sunita Giri on February 14, 2016 No comments: