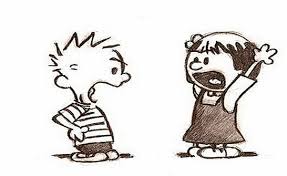 Do you know if someone lose one of the five senses, then; that lost sense will be added to one of the remaining four senses ? This means suppose if a person has lost his eyesight he will have double power either on smell, touch, feel or hear. That other sense could be anything. This will vary from person to person but there is no doubt that one of the remaining four senses will be highly enhanced. I had shared my knowledge of it to one of my friend after reading about it in a magazine. I am sure its Reader's Digest.  Her reaction was, you mean to say that the person will be brilliant now ? I said, no the lost sense do not make that person brilliant but one of the senses will be doubled.

She insisted that this means, it will make that person brilliant. I  tried again to tell her that the sense will be doubled and this is not same as being a brilliant overnight. She thought that it's the same thing; however and I did not say it to mean her that way nor  I see its the same thing.

There was a time, I was the most argumentative person on earth. So, I could not agree less with Dale Carnegie when he writes in his book, How to win friends and influence people, “I have come to the conclusion that there is only one way under high heaven to get the best of an argument and that is to avoid it. Avoid it as you would avoid rattlesnakes and earthquakes”.

When I was young, I had the habit of burying myself in books unlike most of the people who huddle in groups gossiping and socialising. I was never a social person nor I am today. In my youth, I tried to make my point clear, sure all in vain to other people. Because, I was not smart person, so I tried this approach for very long period of time. I mean not just a year or two; I tried this for decades. And then the time came, to keep my opinion with me and not try to make others see my point of view on many topics.

It's not that I have never ever heard of this particular book about, how to win friends and influence people by Dale Carnegie in the past but I have never read it before. How much I regret not reading it much earlier than today. But, we can't undo our lost times nor correct the mistakes we made in past.

When we were young my brother was very bright in study and active in extra curriculums. He used to take part in painting, singing, writing poems, essays and also took parts in debate. What more, he used to win all the first or second prizes after taking part in those competition. Debate was one of his strength, so winning too. I do remember taking part in a debate competition, when I was in 5th grade. It was purely his idea, I take part in this competition. My name was enrolled and when the day came and my name was called to put my point forward, I recited all the lines, that I had mugged which took me days. Let me tell you mugging was never my strength.  There could have been about hundred or so audiences. I delivered all my debating lines looking up all the time in ceiling of the room. Every time, I looked straight and tried to say lines;  I used to I forgot all the lines. Needless to tell you, that was first and last of my taking part in any debate competition.

I would like to say am more logical than the one who loves debating. My friends however, keep saying, you have this natural instinct to win, which I always deny; outright. I say to them, they too have all the chances to win but the only difference is I won't let anyone win by hook or crook. So, it is not surprising some of them, loved to hate me, as it appears everyone wants to win. Long story short, I badly needed to read this book decades ago.

After all these many years, when I read this book with a renewed knowledge not to win argument. However, I am still not keeping friends as I am opting a new tactic, saying to them let's agree, let's agree to disagree. After all these years my staying truth to the point has not changed, I would like to say once I am convinced I am convinced and I am not easy to change my opinion after than. I have learned that I will always  bump with those who has loud opinion, wide open mouth and empty knowledge of what they are talking about.

What is so interesting is my brother is so interested in debate and I am not half good as he is [ now this has transferred to his oldest son, who argues with me and avoiding it is not easy all the time]. In his youth he tried to convert me into Christian just like him. I suffocated hearing preaches in churches or reading some old bible from the very beginning. I decided not to be convert  without tangling with him in any kind of debate or argument. We never win when there is a topic on the table because he and I see from different angle. Nor I have any intention to win over him, however; he keeps blaming me you want to win it as you want.  Long time back, I have decided not to be open up for a debate especially if its a religion.  Be tolerant is what I have learned, I think I am intolerant towards those, who are not tolerant to my choice !
Posted by Sunita Giri on March 27, 2016 No comments: